India is home to a plethora of marvellous ancient architecture, art, and craft depicting fascinating artistry, which has withstood the test of time. Many of these wonders are yet to be fully understood. Some of the fascinating ancient ruins are full of thousand-year-old mysteries that offer a riddle to their spectators. Petroglyphs, the magnificent rock carvings, is one of the spectacular ancient art forms. Petroglyphs are one of the significant discoveries of recent times. The discovery of more than 1,000 rock carvings, in the districts of Ratnagiri and Rajapur in Maharashtra opens a window into an ancient world. Archaeologists believe that the Petroglyph could be 10,000 years old.

Local enthusiasts, Mr. Sudhir Risbud, and his two companions were the first to bring Petroglyphs to light. This was the result of almost six years of consistent efforts taken by them. These carvings depict a variety of images of animals, birds, human figures, and geometrical designs. It is expected that these Petroglyphs would provide an insight into the early history of the Konkan region.

Petroglyphs are one of the prehistoric forms of art carved into the flat, open laterite rock surface/ laterite plateau. These Petroglyphs found in the districts of Ratnagiri and Rajapur depict numerous variety of images. They are mainly, animals, birds, aquatic Animals, Human Figures, Geometrical designs, etc. 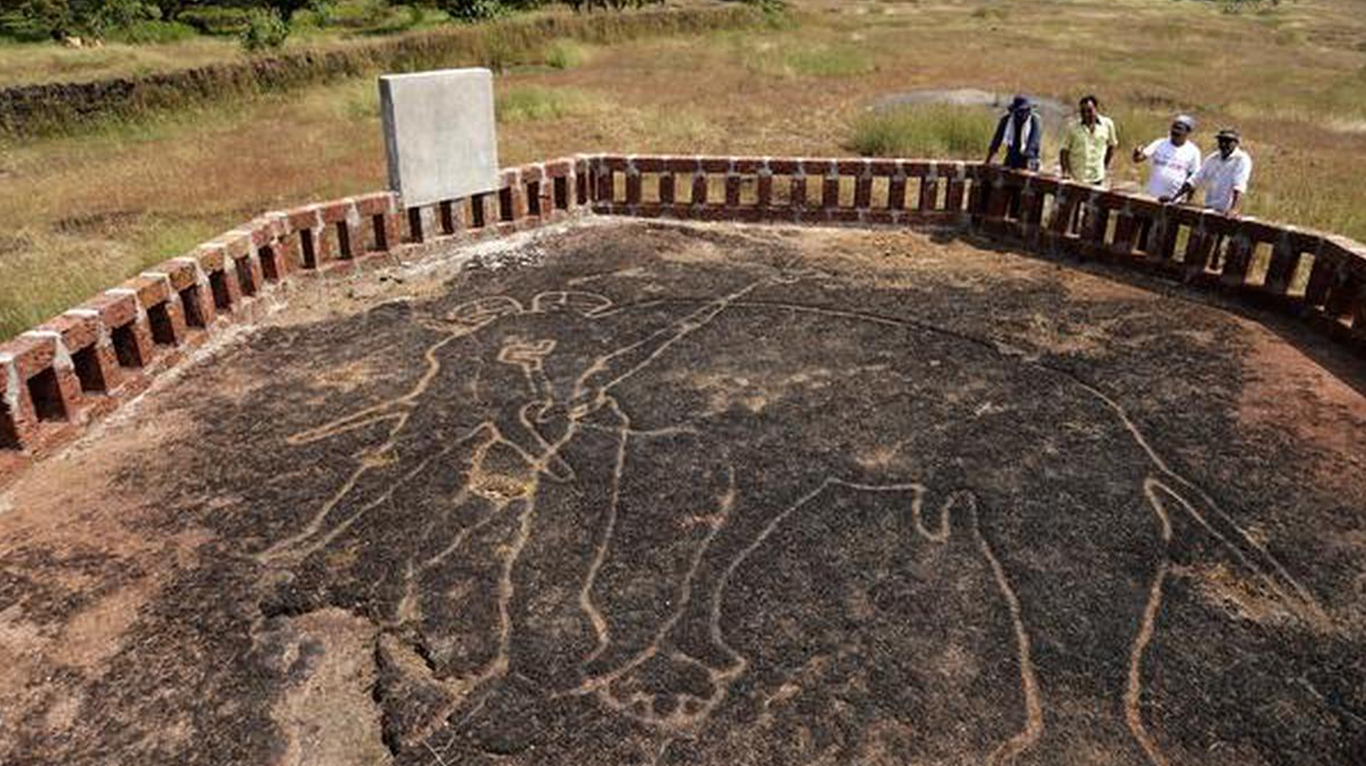 Some of the petroglyphs depict rhinoceroses and hippos, two species that were never thought to be prevalent in this part of India. It raises various questions and doubts among the archaeologists studying petroglyphs. According to archaeologists, these petroglyphs, however, suggest that the Konkan may have once been a lot like the rainforests where these animals are typically found. Some of the rock carvings are life-size, for example, an elephant and tiger petroglyph at Kasheli in Ratnagiri district and some human figures.

Similar petroglyphs have been discovered in the Sindhudurg district, Usgalimal, south Goa, and Kollur, Karnataka. Other prominent petroglyph and rock art sites in India are the Bhimbetka rock shelters in Madhya Pradesh, rock carvings in Mirzapur in Uttar Pradesh, and petroglyphs from the Tindivanam and Villupuram districts in Tamil Nadu and Unakoti in Tripura.

The Significance of Petroglyphs:

According to State Archaeological Department, the discovery of Petroglyphs in the districts of Ratnagiri and Rajapur could open up a whole new chapter in the history of the Konkan region. Petroglyphs are very significant from the perspective of reconstruction of the history of Konkan. These Petroglyphs reveal various unknown facts such as how the man was, how he lived here etc. However the sites of Petroglyphs are at huge risk of being lost or damaged from road construction, tree plantation, mining, and erosion (human and natural).

Mr. Risbud, along with his companions has started convincing the local villagers about the importance of Petroglyphs, the sites, and the need to protect them. They have built a ring of bricks around the petroglyphs and have requested the land owners to build such boundaries protecting the sites. The Maharashtra Tourism Development Corporations has shown interest in developing some of the sites and converting them into a tourist circuit that would attract a lot of travellers and history lovers.

Things to keep in mind while visiting Petroglyphs sites:

The petroglyphs are the hidden treasure, holding the secrets of the past.  Hence it is our responsibility to protect and preserve the ancient treasure. Do not miss to witness one of the marvellous prehistoric forms of art when in Konkan.

We provide end-to-end travel assistance. Click below to connect..!